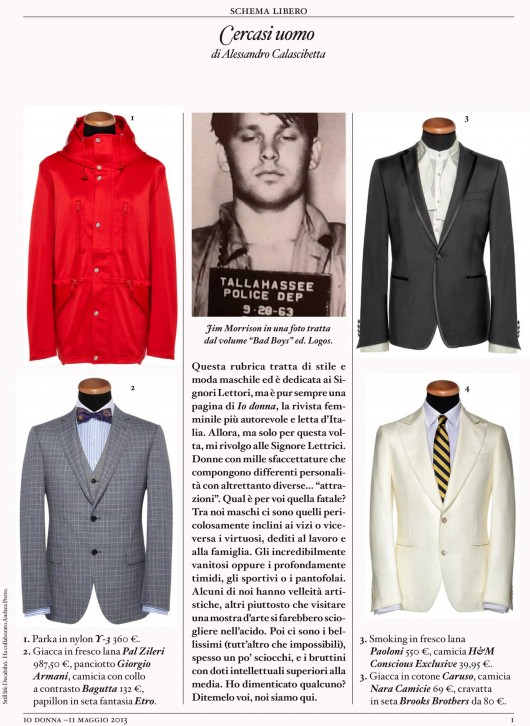 This column is about men’s fashion and style and it’s dedicated to male readers but at the end of the day it’s still part of Io Donna, the most popular Italian women’s magazine so, just for this time, I’ll be talking to the Ladies. Women have so many different sides to their personalities, that’s what makes them feel attracted to different kind of men. Who is your fatal attraction? Some men are dangerously prone to vice or vice versa some others are virtuous and committed to work and family. Some are incredibly vain, some deeply shy. Some men like to play sports and some are homebodies. Some of us are artistically ambitious and some others would prefer to be dissolved in acid rather than go to an art exhibition. Then we have the beautiful ones (which are far from being impossible) but they are often a bit dumb or those who are physically less attractive but intellectually gifted. Did I forget anyone? Let me know, we are here. In the picture Jim Morrison, from the volume “Bad Boys” published by Logos.
NESSUN COMMENTO
TAG: bagutta, brooks brothers, caruso, cercasi uomo, ETRO, giorgio armani, h&m, io donna, nara camicie, pal zileri, PAOLONI, schema libero, Y-3
Lascia un commento:
Fare clic qui per annullare la risposta.