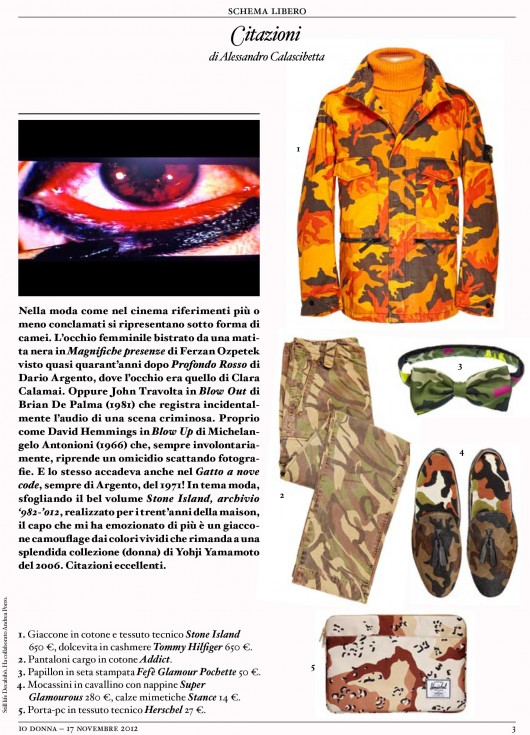 Reasonably evident references, in fashion as in films, are represented as cameos. As the female heavily-bistred eye in Magnifica Presenza by Ferzan Ozpetek and the one in Profondo Rosso, directed by Dario Argento almost forty years ago, which originally belonged to Clara Calamai. As when John Travolta has been recording a crime scene by accident in Blow Up by Brian De Palma, (1981) and David Hammings has captured  the murder scene by chance, wile he was taking  pictures in Blow Up by Michelangelo Antonioni (1966) . It happened as well in the 1971 movie “Gatto a nove code“also by Dario Argento. Regarding fashion, I have been leafing through the pages of the Stone Island Archive ‘982-‘012, and the piece that got me more excited it’s a bright colored, camouflage coat which bring us back to a wonderful Yohji Yamamoto collection from 2006. Brilliant references.
NESSUN COMMENTO
TAG: addict, fefe glamour pochette, herschel, io donna, RUNRICA, schema libero, stance, stone island, super glamourous, TOMMY HILFIGER