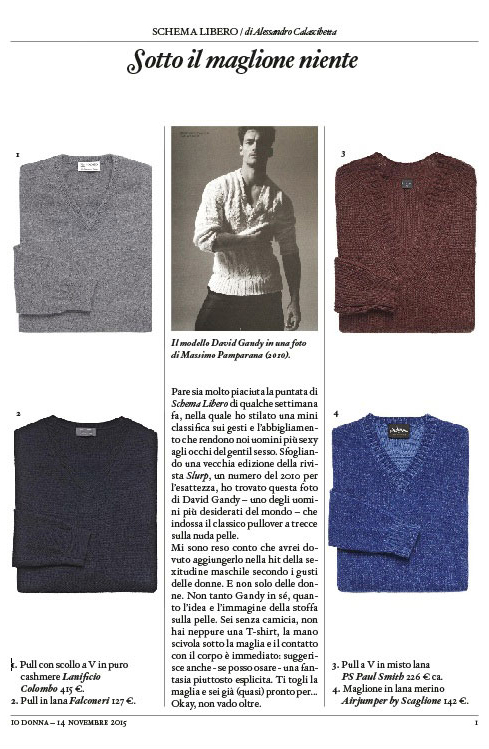 Nothing under the sweater. It seems that the Schema Libero of some weeks ago has been really appreciated – I’ve made a list of the behaviours and the garments that make us sexy in women’s eyes. Leafing through an old issue of Slurp magazine, I found this picture of David Gandy – one of the most desired men in the world – wearing the classic braided pullover on the bare skin. I realized that I had to add this in the hit of the men’s sexiest behaviours in accordance with women’s tastes. And not only women’s. And I don’t mean Gandy, but the image and the feeling of the fabric on skin. If you wear neither a shirt nor a T-shirt, the hand slides under the sweater and the contact with the body is immediate: it suggests also – if I can dare – a rather explicit fantasy. You take off the sweater and you’re (almost) ready for…Okay, I won’t go beyond. The model David Gandy in a picture of Massimo Pamparana (2010)

I must admit that I have a defect: it can take me forever to recognize talent in celebrities. Considering I am a journalist, that is a big deal. Fortunately I write about fashion so in that area I can usually tell when a designer is inventive, even just by looking at a few pieces. Anyway, show business and fashion go together so also celebrities must be considered. Sometimes I have been very good at guessing: for example, I just had to listen to one song by Adele to realize she is an amazing artist and I could tell right away Elio Germano is one of our best actors by watching him play a fairly relevant role in a movie. In the case of David Gandy instead I’m not quite sure about his role…a part from the modelling one obviously, (unlike the two artists I previously mentioned who also pose for glossy magazines). I have met him on set while shooting for Max and I have to say I was struck by his appearance (he’s perfect). However, despite his politeness, he seemed to be so focused on his beauty that he did not to show any other quality. He is probably being successful thanks to Domenico (Dolce) and Stefano (Gabbana) who made him an icon and even managed to make him look classy, creating a unique phenomenon. It’s now up to the english model, (who doesn’t look english at all by the way), to ride the wave of success and maybe take some acting classes, I could see him as the new James Bond, once Craig  will resign. Picture by Giovanni Gastel for Max, David Gandy wearing Dolce & Gabbana.