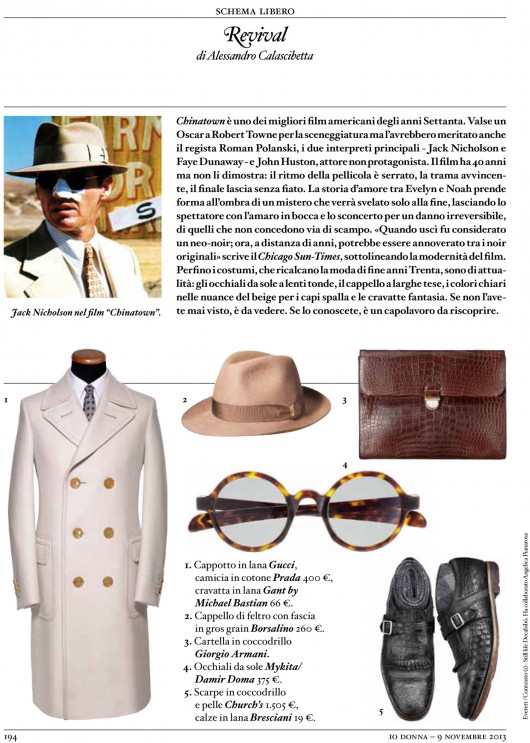 Revival. Chinatown is one of the best American movies of the 70s. It won the Oscar Award for the screenplay by Robert Towne but it should have deserved to win also for the direction by Roman Polanski and for the performances by Jack Nicholson and Faye Dunaway, the two main actors, and by John Huston as actor in a supporting role. This movie is 40 years old but it looks more recent: the rhythm is fast, the plot is engaging, the end leaves breathless. The love story between Evelyn and Noah takes shape in the middle of a mistery that is disclosed in the end, leaving the spectator with a bad taste and upset for a irreversible damage, that has no way out. “When it was released it was considered a new-noir; now, many years later, it could be included in the original noir movies” we read on the Chicago Sun-Times, highlighting its modernity. Even the costumes, that trace fashion of the late 30s, are up-to-date: the sunglasses with round lenses, the wide-brimmed hat, light colours in the shades of beige for the outerwear and printed ties. If you’ve never watched it, you have to. If you know it, it’s a masterpiece to rediscover. Jack Nicholson in “Chinatown”